We didn’t sleep all that well last night due to very high winds up on the valley side, I actually got out the tent in the middle of the night to make sure the bike hadn’t been blown over it was that bad! 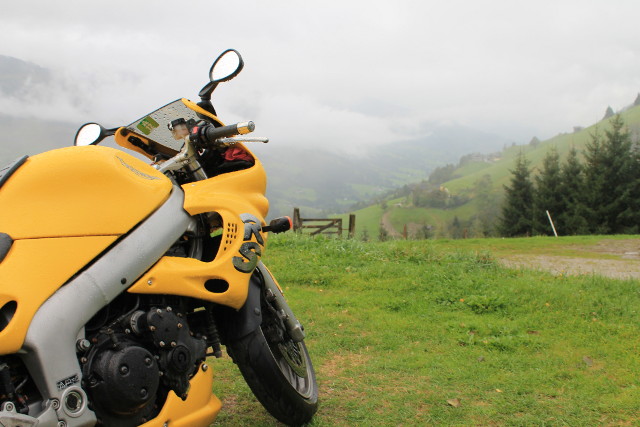 The weather was still windy but now the rain had moved in again along with a lot of low cloud, not what you want when your about to pack away the tent and gear.

Fortunately we didn’t plan on covering too many miles today, this allowed us to have a slightly later start and relax a bit more during the morning. The camp site had really good facilities in one of the barns, you could see everything had been hand crafted out of local wood from doors down to the little door latches etc. It was nice to spend some time having a long hot shower and not have to get changed back in the cold tent, as there was nobody else around you could just get dried and dressed in the building instead. 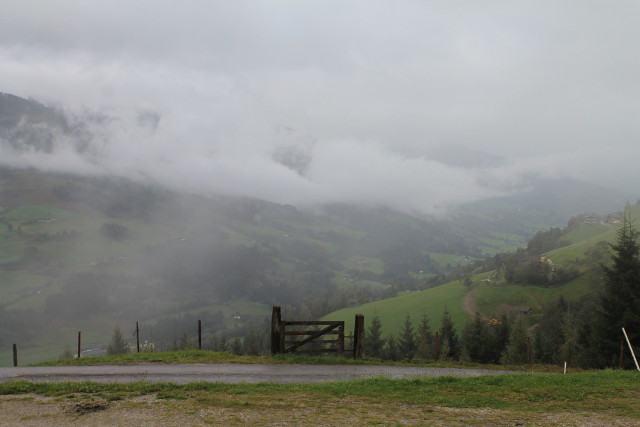 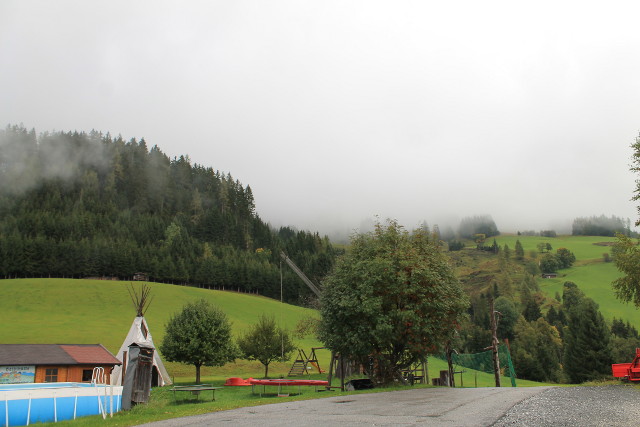 The rain never did stop completely so we had to bite the bullet and put everything away damp, not for the first time either. We opted to not have breakfast and find somewhere to eat in Salzburg, Austria which was only an hour away. 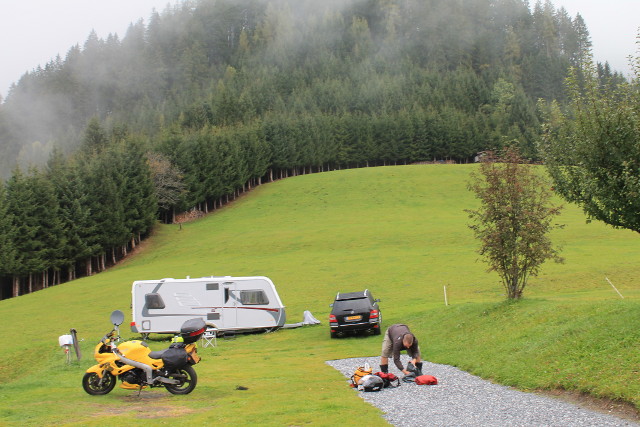 Who said bike boots and shorts don’t go, this is one of my favourite clothing combos! 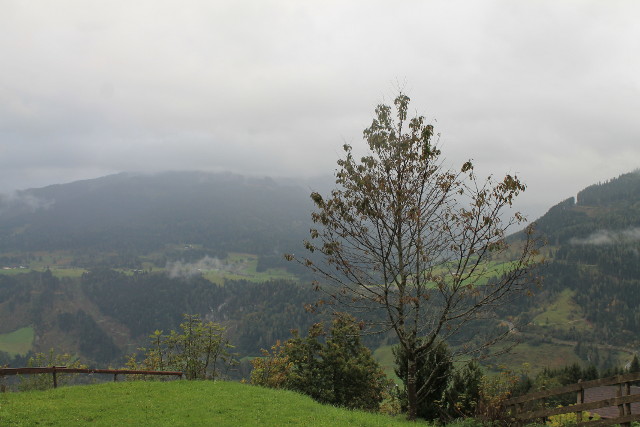 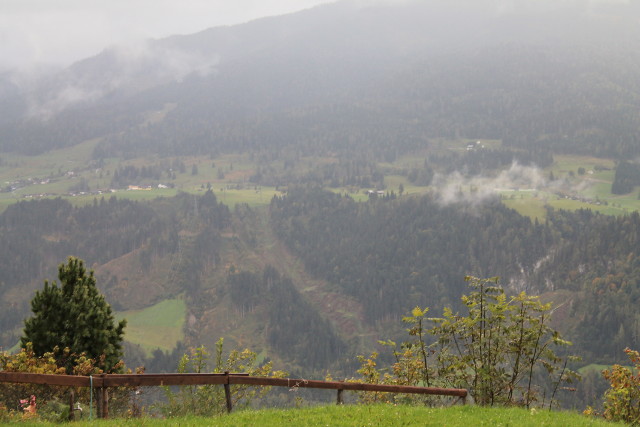 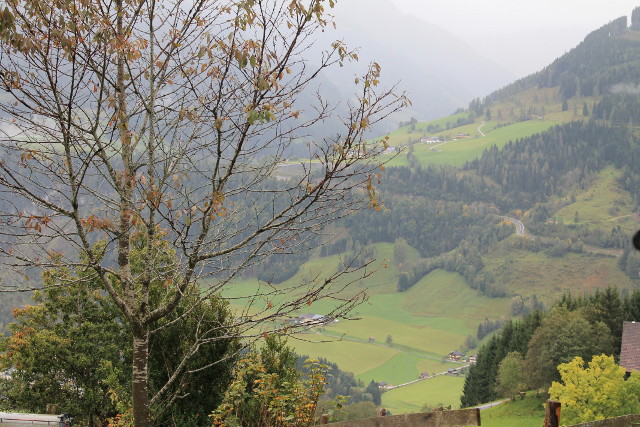 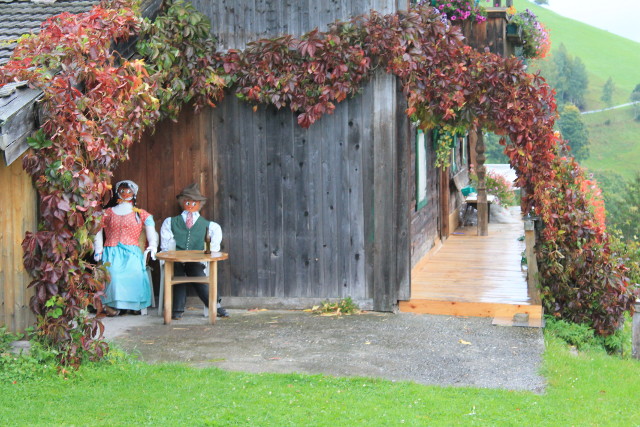 The ride to Salzburg was pleasant although rather chilly, taking in the typical Austrian winding roads through the valleys and mountains before ending up on the main road in to Salzburg. We parked up and went for a stroll about the town, which has an incredible river running straight through the middle and plenty of immaculate little streets and shops to investigate. Salzburg had a very “Alpine” feel to it, which you can see in some of the photos below. I also never took my thermal winter gloves off the whole time I was here it was that cold! 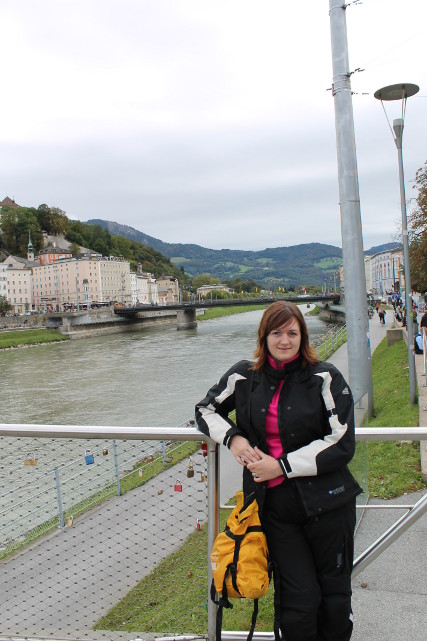 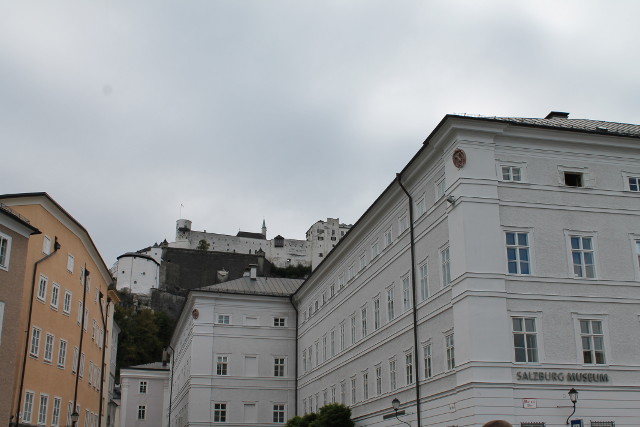 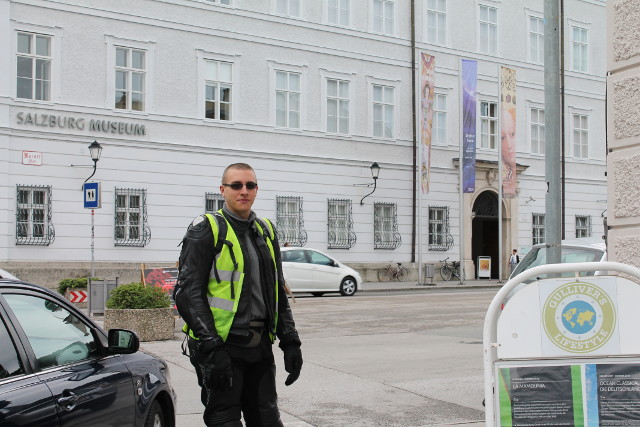 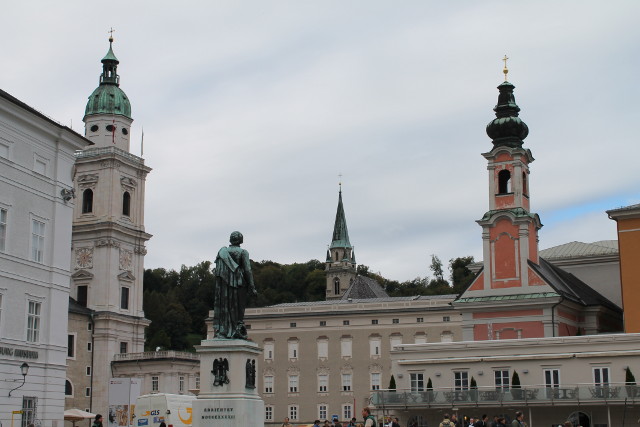 We stopped in a cafe for some breakfast, which consisted of some form of bread roll with marmalade and I had a huge cup of some strange tea, to this day I’m still not really sure what it was haha. 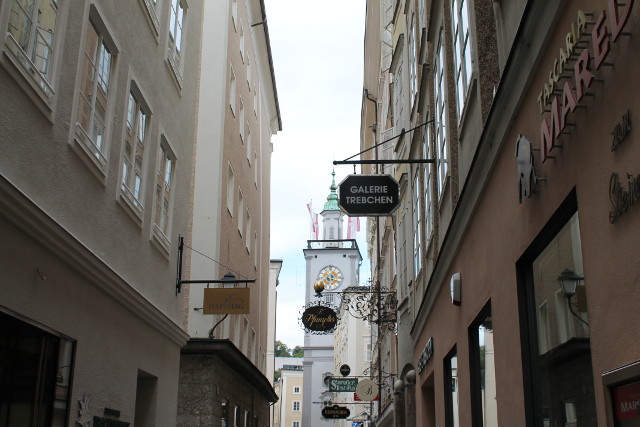 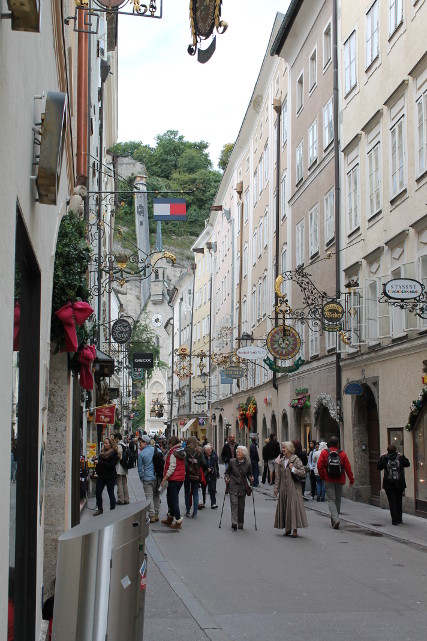 Part of this trip included trying the local food where possible, it would be rude to come to Austria and not eat proper Austrian apple strudel! Which turned out to be harder than one might expect, we did however find a really nice local bakery selling freshly baked apple strudel, much to Kelly’s delight. 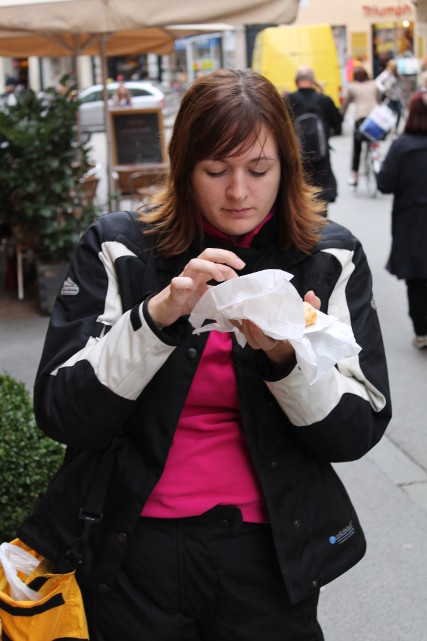 After finishing the strudel we made our way back to the bike for our next journey, we were now leaving Austria and making our way to Munich, Germany.

This ride took us about two hours, mostly on motorways (as you would expect in Germany) which are not very exciting but serve a purpose. As we neared Munich we came to some services, needing some fuel for the bike and a snack for ourself we opted to pull in and have a break. 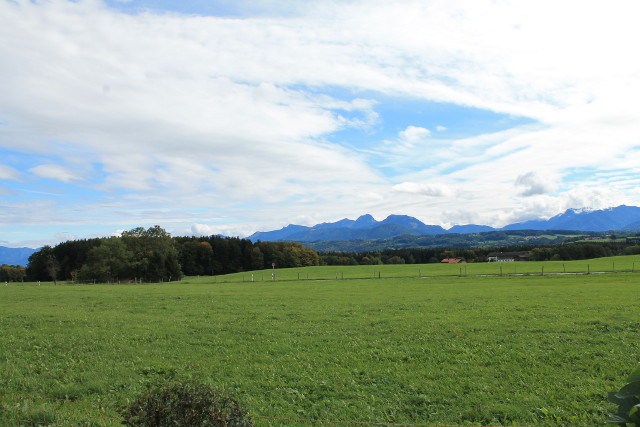 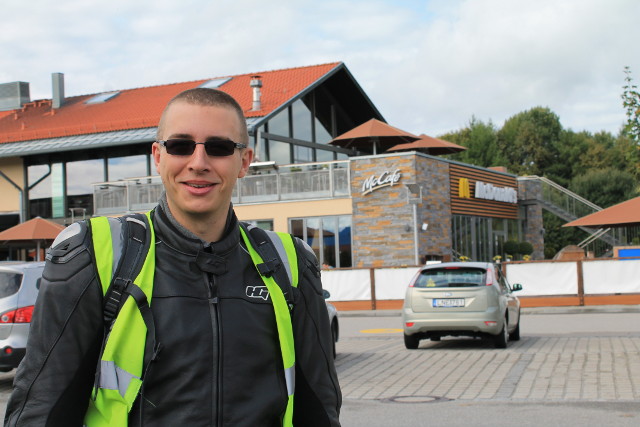 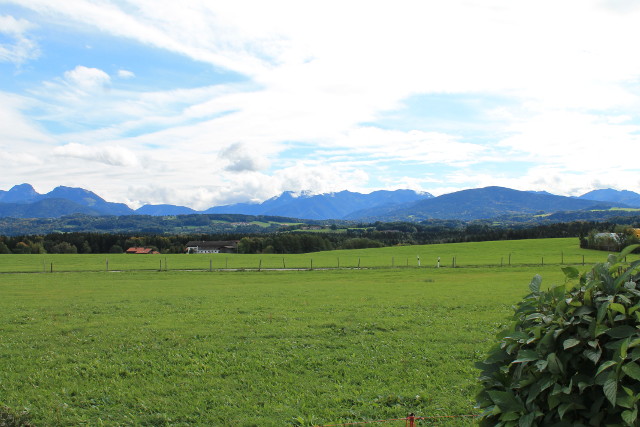 We both had Happy Meals and ended up with two children’s books in German, both of which I think made it all the way back to the UK unharmed!

Back on the road again and heading for our Munich camp site, whilst planning the trip it wasn’t until we started looking for a camp site in Munich that we found out Oktoberfest was on whilst we were here, so as you can imagine everywhere was fully booked and the whole process was rather chaotic!

Once we got to the camp site we were greeted with a sea of tents as far as the eye could see and more Australians than you might find in Australia! I can tell you now they certainly know how to drink! 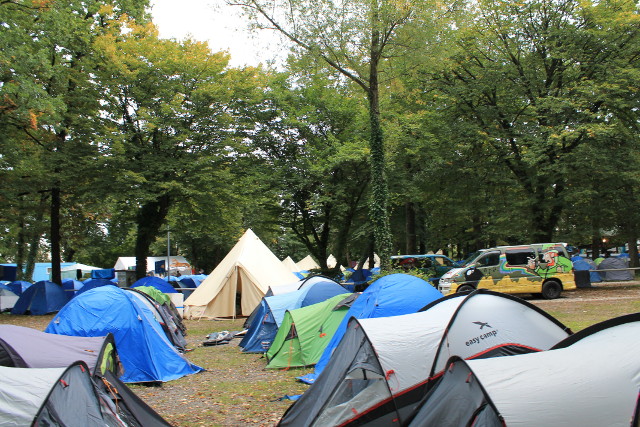 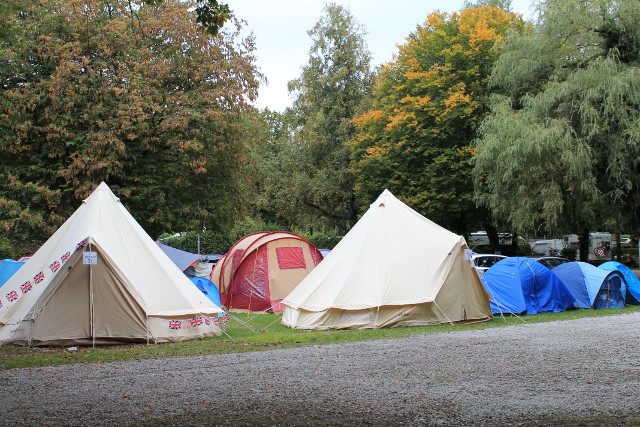 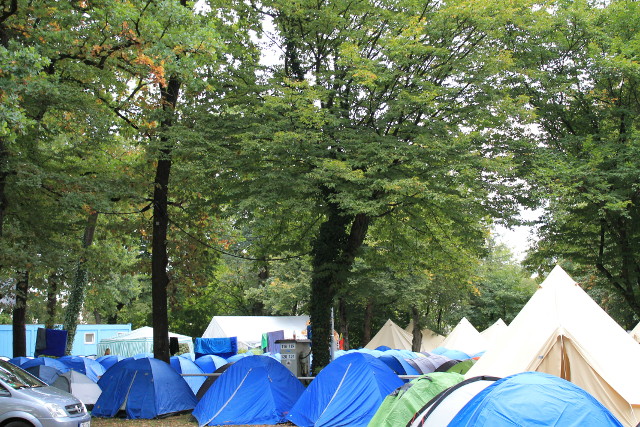 Signed in to the camp site we headed in to the sea of tents to find a pitch, and not before we were moved on by a member of security on a scooter who took us to a couple of free pitches, they seemed “quiet” enough so we pitched up the tent. 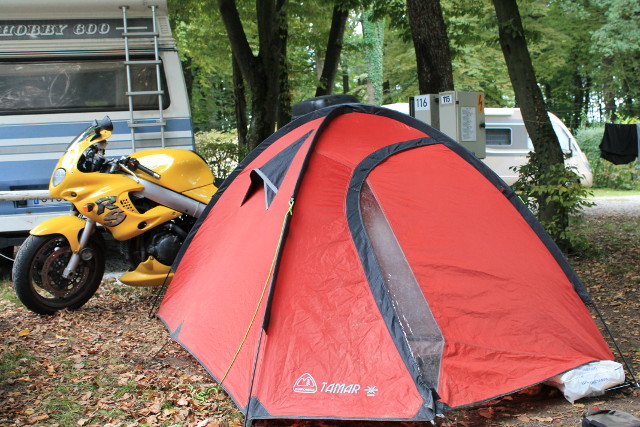 Not before long an English chap on a Suzuki V-Strom arrived, he pitched up next to us and was telling us a few stories. He wasn’t here for the drinking but to visit the grave of a deceased friend. 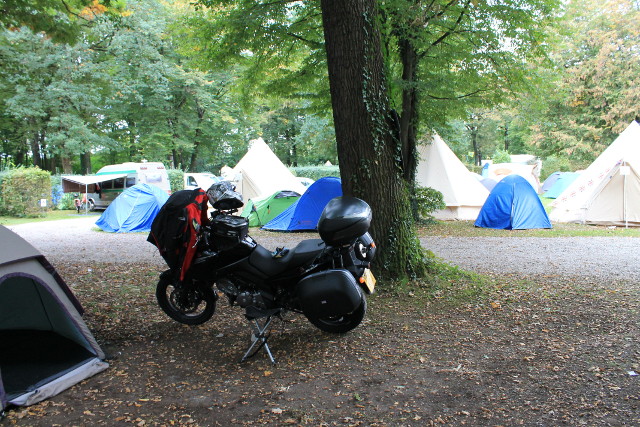 We were planning on getting the bus to the nearest train station, then a train in to the city center. This proved easy as you just had to follow the loud drunk Australians who were all heading there as well. Once at the train station we had a bit of a game trying to buy tickets, as you would expect all the machines were in German and there was no ticket office as such. Kelly got what she though to be the correct ticket, I said bollocks to it and didn’t bother getting a ticket, I doubt the sea of pissed Australians had tickets either!

After making it to the city center and getting off at the right station, we just followed the sea of drunk people who all seemed to know where the beer tents were.
I say tents, they were bigger than most of the pubs in England and looked like proper buildings! Oh and of course it was raining again. 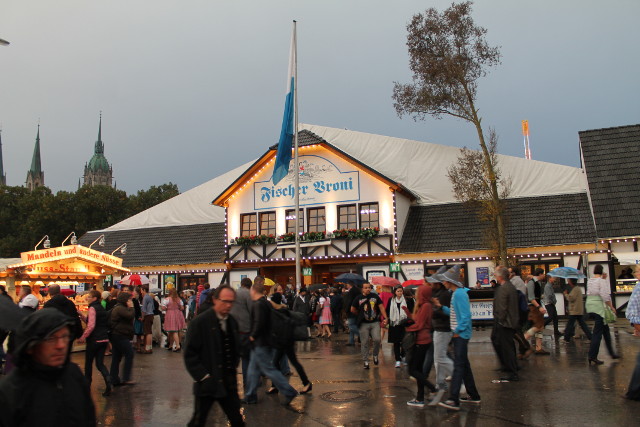 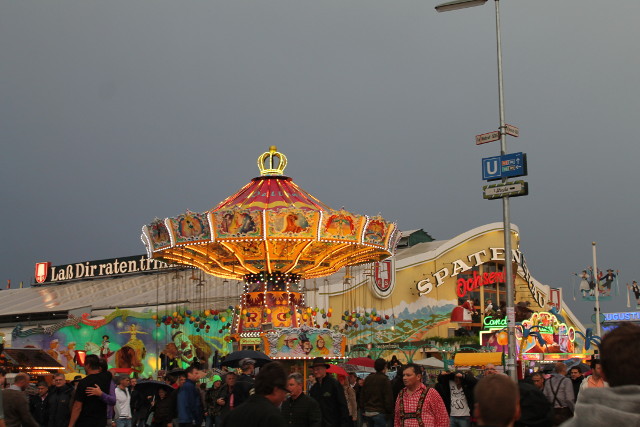 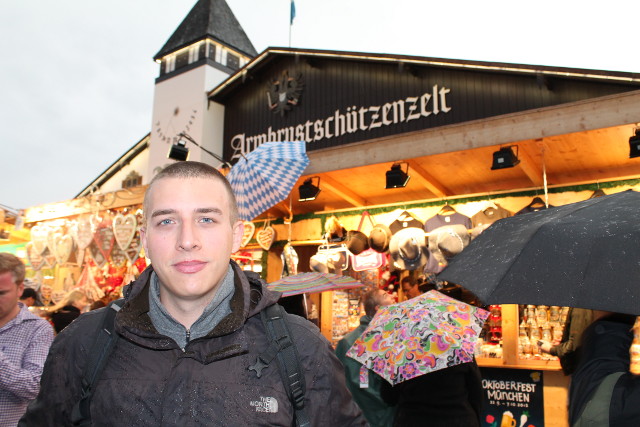 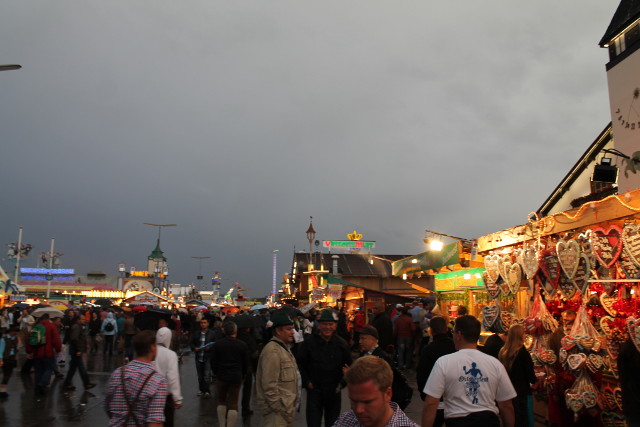 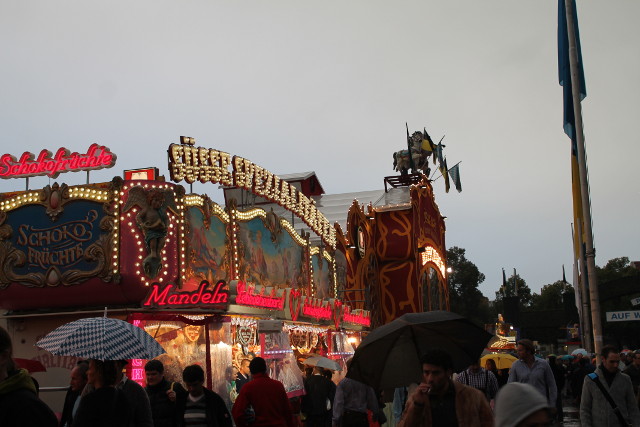 It wasn’t how I expected it to be, there were countless beer tents and hundreds of fair ground rides and stalls.

By now we were both wet and hungry so we grabbed some food, this being Germany we both opted for curry wurst which was surprisingly nice. We then tried to get in one of the beer tents, which is actually stupidly difficult unless you were German or a lairy hammered Australian dressed in lederhosen. We did however eventually manage to get it, I would say the Germans were the most unfriendly people we met on the whole trip and to be honest we were not really surprised by it. The tents were really impressive inside, although not being German it was impossible to get a drink so we promptly left! 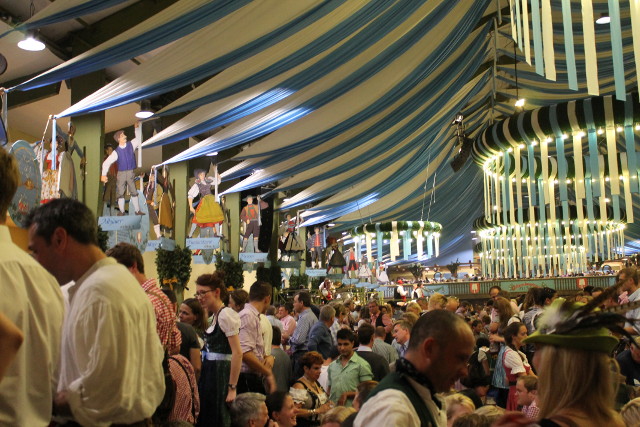 We thought it may be easier to get a beer in one of the regular pubs in town, but still got turned away at the door as it appeared all the Germans book the tables in advanced, I would compare it to wandering in to a British pub on Christmas day! We did however manage to sneak in the back entrance, which was not as well guarded as the front. A quick trip to the loo and we both headed for a bar towards the back of the pub, we both felt like we shouldn’t have been in there as it had a “members only” feel about it, still we both managed to have a beer and grab seat! 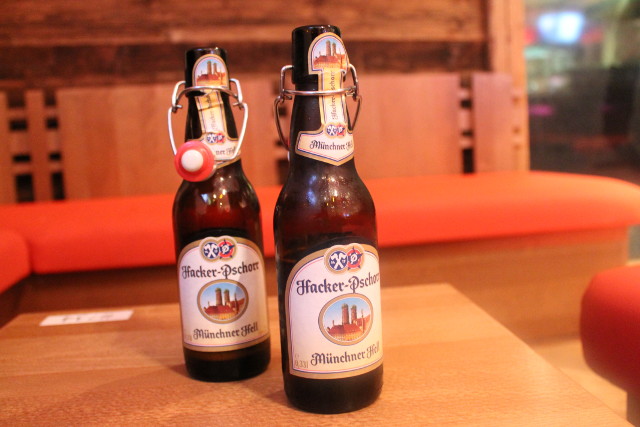 The place soon started to fill up so we left and headed back in to the main center where all the tents were, Kelly really wanted a Nutella crepe and made it our mission to find a stall selling them, which again proved difficult and took a hell of a lot of walking before getting one, which wasn’t much fun in my soggy cheapy Primark shoes.

With the time now getting on we followed the drunk crowd back to the train station, not before grabbing a coke from a little shop situated inside a deserted shopping center. After the short journey on the train we found ourselves with a different bunch of drunk Australians, who we got the bus back to the camp site with.
Back at the camp site we had a few beers accompanied with some nuts in the bar which oddly enough was the most sane place at the camp site!
With it now getting late we headed back to the tent for some sleep, although this camp site was far from a place where you could get a decent nights sleep, loud thumping music coming from the different party tents around the site went on for most of the night, fortunately those couple of beers helped put me to sleep without too much of an issue.