This afternoon I thought I would see if the car would start, and also wanted to give the seats a clean.

The first task was to push the car out of the garage and in to the sun shine, unfortunately one of the rear drum brakes had decided to seize, and no amount of pushing was going to move it. I then remembered that the battery had been on charge for a couple of days now, and that if the car starts I could drive it out the garage. But even after a few days charging the battery appears to be well and truly dead and hadn’t taken any charge at all, bugger!

Plan B. This involved borrowing the decent battery from my green Cinq, and throwing the dead battery in the bin. After a couple of minutes of faffing about the battery was out and promptly fitted in to the yellow one. Stuck the key in the ignition and the lights on the dash came on,  I then attempted to start it, and much to my disbelieve it fired in to live instantly ! I stuck it in gear and slowly drove it out on to the drive, I could really feel the brakes binding and expect I will have to do this every time I want to get it out the garage, well until I service the brakes anyway.

It was then promptly turned off and I checked the fluids to find no coolant, not a problem as I know the head gasket has gone anyway. The oil was a bit low so that got topped up, along with filling the cooling system with water. The car was started again and left to idle for a few minutes, followed by a good few revs to clear out any crap in the system. It’s safe to say the engine runs nice and the exhaust has a good throaty noise, without sounding chavtastic. It did sound like something was squeaking, I expect it to be the timing belt which is going to be changed anyway along with the tensioner, water pump etc.

Now to crack on with cleaning the mould off the seats. It made sense to remove them rather than struggle cleaning them in situ, as it’s only four bolts holding each one in place. Now just for reference this is how they looked before I did any cleaning. 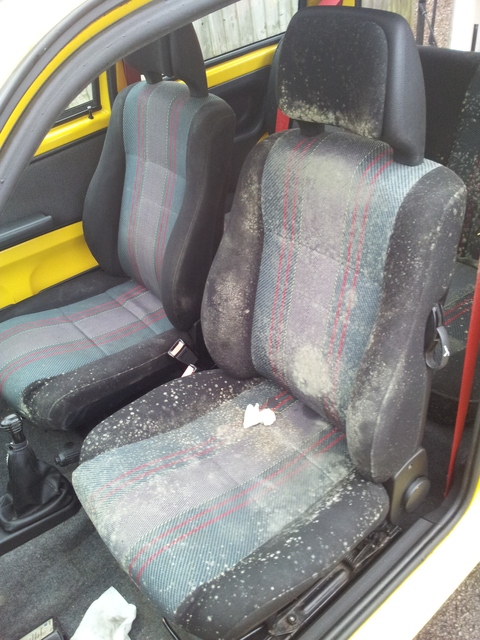 I borrowed a proper wet and dry carpet cleaner from my mum to clean the seats with. This is how they came out after about 15 minutes worth of work, they are 95% perfect and I think a round with some hardcore stain remove and they will be good as new, result ! 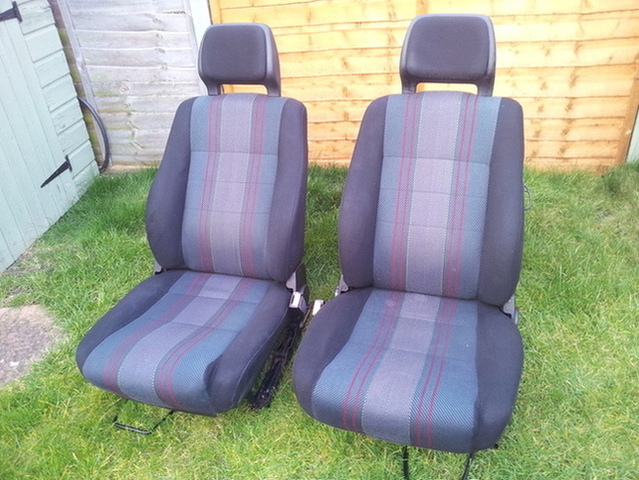 As you can see they came up pretty good.

Last job was to put the battery back in the green one, so that I can get to work in the morning.

Next weekend I will attack the rear seats.